Most of the stuff I read or even watch – as you may have noticed by the various post on this blog – are of a certain speculative fictional nature. Giant Days is not that. Giant Days was recommended to me by someone well-versed in comic books and I had 10$, an Amazon Prime account and no reason not to check it out.

Giant Days is a slice-of-life comic book series by Boom Studios written by John Allison, drawn by Lissa Treiman and colored by Whitney Cogar, I wasn’t familiar with any of their work beforehand and I think I’ll try to rectify this now. It follows the life of three University freshman in what I’m assuming is England (between the mention of pounds, mate and lads), women to be precise, who have to deal with all the adversity you’d expect. Esther is a semi-gothic dramatist (that is, she has the supreme ability to draw drama to herself), Susan a temperamental femmist going for a degree in Health-related stuff, Daisy is the innocent one of the trio with lacking social abilities due to being home schooled and keen naivete. And that’s the entire premise of the story, these three girls with clashing personalities quickly come to get along at University and hijinks ensue.

Being in university I can sort of partially relate to it (you know, aside from the part that my social abilities tend to be worse than Daisy’s and I’m likely getting a meaningless degree that won’t bring me forth any sort of stable post-graduate job… but that’s a discussion for another time). Giant Days is of course not written for me, but I can’t help but enjoy the first four chapters of the series.

It goes without saying that the friendship between the three characters is what lies at the core of this story. Despite their conflicting personalities, they look after each other and will willingly go out to bat for their friends. When a group of “lad culture” followers list Esther on a list of 25 hottest fresh meat, Susan is ready and willing to go through a box of trash to figure out a way to get back at them (and she does, through the classical use of calling their mothers, which Erica maybe should’ve done in the Social Network… you know, if she had a Susan by her side) and though it doesn’t always workout best such as when Esther confronts Nadia (Lydia’s newfound friend and possible crush) about leading Daisy on and realizes that she fucked up about a second after Nadia espouses her right to want a friendship.

While it’s probably not written for me, as mentioned before, it’s easy to relate to if you’ve been in University or you know, are in University. Flu season, dude bros, dealing with the presence of former flings and falling for possible future flings, drug experimentation and horrific alcohol binges are just the first of the tons of stuff you may (or may not, if you’re a boring old lad like me) have experienced in University.

The other two characters worth mentioning in this series are Ed and McGraw. Ed’s a quasi-social outcast too and he’s crushing on Esther, unfortunately he’s in the iconic friendzone and as much as he might be crushing on her, Esther either doesn’t notice or care which sucks for him because as he so lovely says it, he either wants her to love him or him to love her no more. McGraw is Susan’s ex and after some sort of dramatic falling out in their past, Susan doesn’t ever want to see McGraw ever again, alas, that’s hard when they go to the same school.

Whenever I deal out my thoughts on comic books or really any sort of medium I sort of get hung up more on the characters and the story itself and end up ignoring a very key part of it all, the actual art. It’s partially because other than, “hey, that looks cool,” I’m not knowledgeable enough a critique, and partially because story usually stands out a great deal to me. 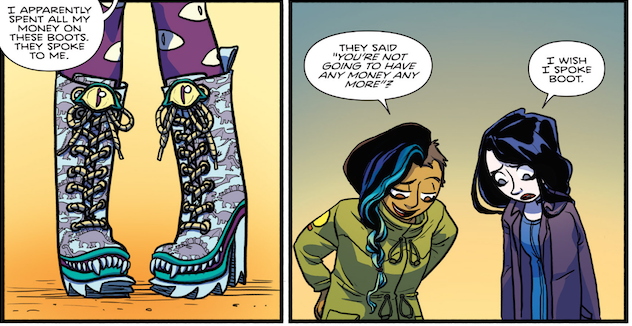 All that said, Lissa Treiman’s drawing and Whitney Cogar’s colors are ridiculously awesome in Giant Days. For a slice of life, you’d probably expect a rather limited plane to play with but Lissa does a wide variety of stuff here, the facial expressions are always vivid and on point (particularly when Daisy’s dealing with the aftermath of certain pills), the character designs are diverse, the environment stands out. The best I could honestly say is to just check out the art for yourself (which conveniently for my lack of expertise, I’ve laid out here for you).

So, should you check out Giant Days? Well, if you’re cool with three girls dealing with every day University problems in awesome ways then fuck yeah. This probably won’t be everyone’s cup of tea in terms of genre but there really isn’t much to hate here except for one thing which I unfortunately can’t ultimately resist pointing out: there are non-white people in Britain… I’m pretty sure. Alas, there’s but a single non-white name character in this series (Nadia). The three main girls are white. The kid crushing on Esther is white. Susan’s former crush is white. The three lads with the fresh meat list are white. The dean is white. ‘Nuff said. It can’t stop me from enjoying it but its still something that I’d like to see in this series.