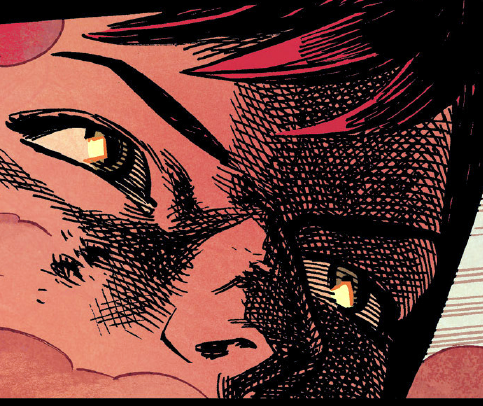 Black Widow #1 came out this Wednesday. It’s the first issue. I’m getting back into comics. Why not?

I delved into my history with Spider-Man and I believe Power Man & Iron Fist when I first started reviewing either series so I think it’s worth doing that here too. My experience with Black Widow is mostly two-fold. The one everyone else has with her, Scarlett Johansson the super-spy and sole main female member of the Avengers, she’s charming, deadly, and has been shipped with pretty much every other member of the Avengers… except maybe Quicksilver (though I bet you I could track one down). The other one I’m used to is the mostly cold, extremely effective agent of S.H.I.E.L.D., with a Russian accent, and most of that knowledge comes from Earth’s Mightiest Heroes, the fantastic Avengers series that preceded the mediocre Avengers Assemble series.

The Black Widow team assembled here was also the team behind the popular Daredevil series which I have not read – but, it’s just to emphasize the experience they’ve got together and the pedigree they’re bringing to this particular project.

This one stands out pretty much from the get go, for the art style (though Daredevil fans may be used to it) and because Black Widow literally says two words the whole first issue “Me Too.” Generally, it’s hard to pinpoint what I particularly like about the art, I say it so many times you’re probably tired of hearing about my inexpertise in regards to it, but I think I can manage to formulate what I mean here. Despite those two words being the sole ones she said, Chris Samnee’s ability to make the characters speak without, you know, speaking – is uncanny. The death stare she gives when Hill announces through the intercom that she’s public enemy #1, the comical sort of internal sigh of ‘well, that’s just my luck’ when she breaks through a wall into a room full of S.H.I.E.L.D. agents, her realizing her predicament and giving up in mid-air, and shortly thereafter, the ‘yeah, you fucked up underestimating me’ glance she gives when she sends one of them parachuting away.

Basically, holy hell, you can tell a lot from a facial expression. I almost feel like studying this just to discover how you can possibly describe those looks in word form.

The plot here isn’t immediately apparent but you know well enough to understand the conflict. Natasha Romanoff stole something important from S.H.I.E.L.D., we don’t know what, and, it seems, Romanoff isn’t sure of its importance either, that said, Director Hill is determined to get it back and Black Widow is instantly a S.H.I.E.L.D. priority, no matter whatever good will she once had.

Widow’s always had a history of shady intentions and backstory (though this isn’t entirely conveyed in the Avengers film, it’s still there to a certain degree), so my easy speculation is this wasn’t an independent decision but someone telling her she should, or had to steal it from them for whatever reason be it S.H.I.E.L.D. abuse (hey, they’re a shady organization themselves), or what have you. Whatever it is, both the S.H.I.E.L.D. agents and Romanoff are willing to do everything to keep it. While it seems Black Widow is hesitant to deal with the agents in any sort of truly lethal fashion, by the end of it, she resigns herself to what needs to be done and *seemingly* deals with one in a much more permanent way (via rock to the skull), and sort of depletedly contemplates rather this was the best decision (again, almost wordlessly). 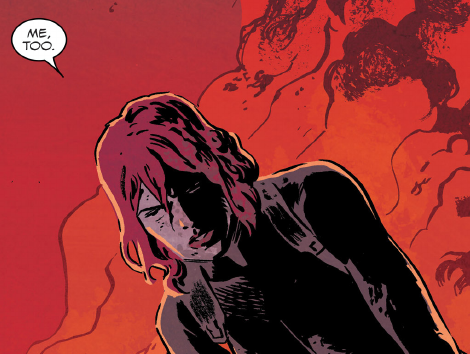 This whole issue is pretty much a masterclass in art and writing. The ability to convey a story in so few words, and with such poignant art is pretty incredible.